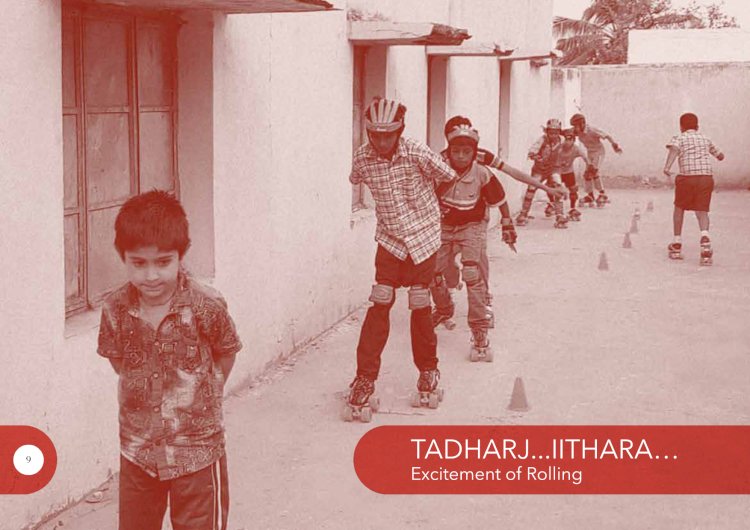 Childhood is often remembered, particularly school days, for the time spent playing with friends. And schools also provide the rst exposure to sports and extra-curricular activities. GHPS Udburu created a similar environment for its children with support from the Jockey Fit Children Program. Sports, particularly roller skating, got cemented into the school children’s fancy. This initiative earned GHPS Udburu the moniker of becoming the rst government school in Karnataka to have a skating rink constructed. For India’s sporting aspirations, athletics track at government schools is a dream almost impossible to realise. But when GHPS Udburu was presented with a skating rink and a coach, the children were confused. They thought their play area was being concretised. Until select few students were offered skating materials like roller skates and shoes. It then grabbed everyone’s attention.

In the academic year 2017-18, Sugamya Shiksha initiated in-school training with approximately 25 students. Latha, studying in grade 6, was one of those 25 students selected for training. Initially, Latha was too scared to be trained. As time passed and she got trained by a professional, she gained the courage along with the moral support of her parents. Three years from then, Latha is now one of the best skaters at the school. She competes at various competitions and even helps junior skaters with their practice. Latha recently participated
in a skating marathon held at Makkala Dasara, as part of annual Dasara festivities. During the marathon, government ofcials who attended the event appreciated the participation of government school children in a
skating-like event. Latha also participated in a skating competition organized by Decathlon in Mysuru.

Although it took quite some time for children to accept skating in their school, it emerged as a blessing for learning, with it getting integrated along with science and mathematics lessons. This enabled students to enjoy the space well and embrace fun lled learning. Skating also reduced absenteeism and brought discipline within the children. As a consequence, their academic performance began improving. This change produced substantial appreciation within the community members too. The community now supports smoother functioning of the school. They are also amplifying the thought of propagating skating among other government schools across Karnataka.Similar to other sports, skating also possesses the ability to increase the heart rate through aerobic respiration process. It coordinates for healthy joint development, as discussed by the Centre for Disease Control (CDC). Skating thus serves a purpose similar to other physical activities at school, improving the cardio-vascular health of the children. This is why children of Udburu just don’t run… they roll… the excitement gained through rolling and the excitement to do more is a complimenting process that keeps the skating rink here alive.