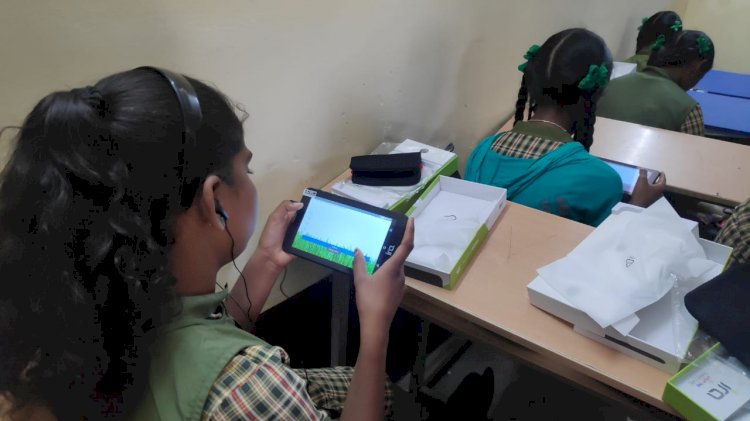 "If the mountain does not come to Mohammed, Mohammed must go to the mountain. If the poor cannot come to education, education must reach them at the plough, in the factory, everywhere.”

There is no better way to remember the spiritual guru than by living his wisdom. And there was no better way to mark the 157th Jayanthi of Swami Vivekananda’s birth than by taking the means of education to those who could not come to it. GRAAM, in association with Rotary Bangalore Downtown Club, marked the occasion by distributing tablets to grade 10 students at Kudlu Government High School, Bengaluru. Students including 36 from Kannada medium and 20 from English medium were the recipients. The tablets came preloaded with class 10 curriculum for the benefit of the students. Ms.Usha Selvaraj of the Rotary Club introduced the tablet & the digitized textbook content within.

The event was presided over by Dr. Basavaraju R. Shresta, Executive Director, GRAAM and Dr. Madhura Chatrapathy, PDG Rotary Club & Chair of TEACH in Bengaluru district.  Addressing the gathered, Dr. Basavaraju recollected an anecdote from Swami Vivekananda’s time in New York and quoted the saint’s observation - ‘Education, education, education alone! Travelling through many cities of Europe and observing in them the comforts and education of even the poor people, there was brought to my mind the state of our own poor people, and I used to shed tears. What made the difference? Education was the answer I got. Through education comes faith in one's own Self, and through faith in one's own Self the inherent Brahman is waking up in them, while the Brahman in us is gradually becoming dormant.’ In sharing so, he reiterated the call to unite people with education, to have educated youths who will help in the process of nation building. He also reminded the children that the tablets provided today are from hard earned money of few people who had good thoughts of supporting the children in need. And that we need to respect & be committed to these people by using the tablet in the best way.

Dr. Madhura Chatrapathy reminisced of her journey that began thirty years ago, starting an NGO to work for the upliftment of women. She stressed on the need to develop interactions with new people to develop contacts, which would help in getting information, new ideas and support in development of the self. She encouraged the children to have a dream and respect their dream by being open-minded about it. She filled confidence in the students by asking them to accept difficult situations as challenges that need to be overcome. In her conclusion, she called out with open arms to the children to come forward and make use of the resources being provided, and help them in return to develop themselves; a cyclical process that eventually helps in the development of the country.

School HeadMaster, Mr. Raghupathy and other faculty members had arranged & anchored the program within the school ensuring all the social distance protocols. SDMC member Mr. Muniraju was also present on this occasion.