The Union Government of India in August 2020 released the Draft Companies (Corporate Social Responsibility Policy) Amendment Rules, 2020 for people’s comments. In consideration with the proposed amendments, the Ministry of Corporate Affairs (MCA) did not seem convinced on the importance of CSOs in the development of the nation, neither in the history, nor with the contemporary evidence. GRAAM takes the opportunity to respond to the comments sought by the ministry concerned. 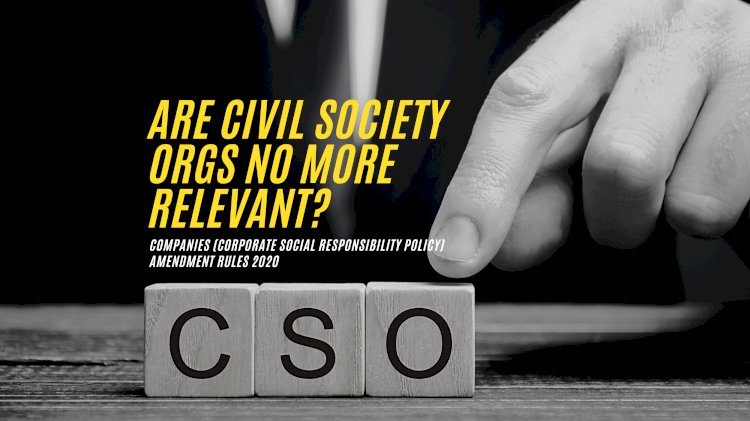 It is indeed heart-warming to observe the collaborative efforts of the government, civil society organisations (CSO) and citizens in attempting to combat the COVID-19 pandemic. Chanting the mantra of togetherness, CSOs plunged into action on the ground and expanded the reach of humanity. The government initiated an exclusive website to onboard CSOs officially. Our political leaders also called for solidarity, and participation of CSOs for aiding relief to the needy.  While this being the story on one part, another arm of the Union government had released the draft Companies (Corporate Social Responsibility Policy) Amendment Rules, 2020 for people’s comments. In consideration with the proposed amendments, the Ministry of Corporate Affairs (MCA) doesn’t seem convinced on the importance of CSOs in the development of the nation, neither in the history, nor with the contemporary evidence. But for long, CSOs have strived as a catalyst in expediting the development process, be it for eradicating polio from India, reducing the prevalence of HIV, pioneering the concept of women self-help groups for poverty alleviation at the micro level or playing a pivotal role for bringing progressive public policies at the macro level.

4 (1) The CSR activities shall be undertaken by the company, as per its stated CSR Policy, as projects or programs or activities (either new or ongoing), excluding activities undertaken in pursuance of its normal course of business.

4 (1) The Board shall ensure that the CSR activities are undertaken by the company itself or through:

(a) a company established under section 8 of the Act, or

(b) any entity established under an Act of Parliament or a State legislature.

Provided that such company/entity, covered under clause (a) or (b), shall register itself with the central government for undertaking any CSR activity by filing the e-form CSR-1 with the Registrar along with prescribed fee.

Provided further that the provisions of this sub-rule shall not affect the CSR projects or programmes that were approved prior to the commencement of the Companies (CSR Policy) Amendment Rules, 2020.

The CSR ecosystem is proposed to take a substantial shift as the amendments prescribe a change in the eligibility of entities who undertake CSR activities.

Hence, it is ideal to have an existing practice of including NGOS, Trusts and Societies along with suggested new practice. A consortium of Section 8 & NGOs/trusts can be formed for implementation with clarity on roles.

It is ideal to have an existing practice of including NGOs, Trusts and Societies into the  suggested new practice.

4 (2) The Board of a company may decide to undertake its CSR activities approved by the CSR Committee, through

This clause has been carried forward from the previous one. However, as far as reporting is concerned the companies have to look for a reporting structure, even if  it enables them to collaborate and implement the CSR.

4(3) A company may engage international organizations for designing, monitoring and evaluation of the CSR projects or programmes as per its CSR policy as well as for capacity building of their own personnel for CSR.

Provided that a company may also engage an international organization for implementation of a CSR project subject to prior approval of the central government.

The draft amendment proposes that a company can engage international organizations for designing, monitoring, evaluation, and even for implementation of the CSR projects, following prior approval of the government.

It’s a known fact that international organisations wouldn’t have the geographical reach.  Therefore, their focus of work might get limited around the companies’ establishment and urban areas to their convenience.

To manage their absence at the grassroots, international agencies would have to depend on local organizations for program implementation. This might only add another layer leading to an unnecessary increase in operational expenditures, reducing investments that benefit the primary stakeholders.

The thematic or technical know-how is not just enough to take up developmental activities. It mainly requires the competence of working with community and understanding its dynamics

Furthermore, the method of seeking the mentioned prior approval is not laid down in the draft. This would require the involvement of MEA and MHA, which shall lead to complicated operational challenges.

4(4) Subject to provisions of sub-section (5) of section 135 of the Act, the CSR projects or programs or activities undertaken in India only shall amount to CSR Expenditure.

4(4) The Board of a company shall satisfy itself that the funds so disbursed have been utilized for the purpose and in the manner as approved by it and the Chief Financial Officer or the person responsible for financial management shall certify to the effect.

The introduction of CFO further enhances the role of close monitoring of CSR program management. However, it may be too cumbersome to practice having the Board report and also certified by the Chief Financial Officer or the person responsible for financial management. There has been a setup of a CSR committee already to look after the accounts of CSR spending. However, adding another authority certifier will duplicate the process.

This clause makes the CFO apparently responsible for the entire CSR provision without him being part of the CSR committee or the board of directors.

Probably, such certificates shall have to be placed before the CSR committee and / or the board – the draft rules are silent on this.

The total amount spent by India Inc through its CSR in the recent fiscal report was Rs 8691 crores. The CSR money spent across the four financial fiscals (upto 2018) was around Rs.50,000 crore and the unspent amount is higher at Rs 60,000 crore during the same period. This shows that CSR investment towards development projects needs a serious improvement. The contribution of CSR funds towards CSOs is significant amidst the declining foreign funding of recent times.

While CSR investments may seem insignificant in front of philanthropic and government contributions to the development sector, it nonetheless has inspired innovation, and leveraged the use of information technology to respond to developmental challenges effectively. Importantly, the CSOs’ overhead expenditures, which is crucial for sustenance, are complimented by CSR grants which have been curtailed by other donor agencies.

India’s committed CSOs have been working with limited or no resources. Responsible corporate houses have been supporting these CSOs despite any statutory mandate due to their understanding of the importance and ethos of CSOs. Development practitioners appreciate the move of the government to regulate CSR investments. The regulation has certainly made corporations consider the CSR expenditures as a development investment, as it is a considerate sum now. This is good as it makes every stakeholder accountable.

The new era of CSR has contributed many new solutions for age old problems with the changing causality. CSOs have been the forerunners of bringing about progressive changes in society. This should only be further harnessed and not jeopardised.

About the Author: Dr. Basavaraju R Shreshta is a public policy and development professional having diversified expertise in designing and conducting large scale multidisciplinary research and evaluation studies, developing policy, vision and strategy documents, designing & implementing projects in the Non-Profit, Government and Corporate Social Responsibility sectors. He is currently working as the Executive Director of GRAAM.

Launch of IVRS for Strengthening Community Engagement through JAS