The journey of lending a listening ear to the cues of struggle… Doesn’t listen to anybody… always silent and inactive... doesn’t respond to instructions … ignorant and disrespectful… always sits alone… This is then followed by disciplinary actions.  How can one listen when one can’t hear? How many of us actually understand the power of hearing before listening? Is listening restricted only to perceiving and understanding sounds? Doesn’t silence also convey a message? This is a call for all to hear here. 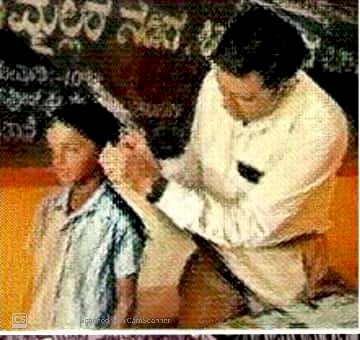 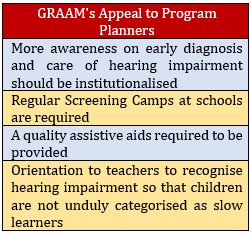 While the society is emerging to extend an empathetic approach towards persons with hearing difficulty, its outreach in the grassroots, i.e., the villages are yet to yield change. Amidst the negative emotions and discriminatory expressions against persons with disabilities, many families and communities fail to identify a person with hearing disability as it manifests as an invisible impairment.

“He doesn’t respond to any of our calls, he is always silent, stays separate. We keep calling him and he just doesn’t respond. It seems like he doesn’t pay attention to anyone. This is disrespectful,” stated a teacher of Ramesh (name changed), a class five student, Government Higher Primary School, Dasarakoplu, Hassan. Ramesh was perceived to be a slow learner with least interest towards studies. Teachers and parents tried their level best to get Ramesh to respond, with failed results. On being helpless, all that they could do was shout at the child.

However, during a hearing test conducted by GRAAM through Sugamya Shiksha’s Chirayu programme, parents, villagers and teachers were shaken to know that Ramesh was subjected to hearing disability. Upon providing Ramesh with hearing aid, he emerged to become one among the self-motivated students who proactively participated during classes. Ramesh’s mother broke down with guilt and said, “Many times, I have beaten my son with hard sticks for being non-responsive and inactive. It was only during the hearing test conducted by Sugamya Shiksha, I became aware about my son’s hearing impairment. I failed to identify my son’s difficulty and failed to stand by him during his trying times.” This right intervention has resulted in Ramesh becoming sharp in his responses, spontaneous in his actions and attentive during classes.

Chirayu is an initiative of GRAAM, under Sugamya Shiksha, for identifying and aiding children with hearing disabilities. Through Chirayu (which kickstarted in 2016), 2460 children underwent screening by qualified doctors. 11 schools had three screening sessions each followed by counselling of parents and students. 16 hearing aids have been provided to 12 students post-screening.

Hearing disability was the second most cause of disability and among the top most causes of sensory deficit according to the National Sample Survey (2002) which attempted to study disabilities in Indian households.

While Ramesh was one example, there would be many other children who are subjected to similar hardships whose future living and livelihoods are at stake. According to various studies, 63 million people (6.3%) in India, suffer from significant auditory loss. Four in every 1000 children suffer from severe to profound hearing disability with over 100,000 babies that are born with hearing deficiency every year. Research also states that the number of persons with hearing disability per 100,000 was 291.

Therefore, all that it takes is an approach of compassion for finding out the cause of hardship and accordingly, an effective intervention to combat the concern.  This effort when implemented, can be translated as a confident boost for children’s endless imagination which opens up the window for building on dreams and aspirations for a lifetime. Let’s ensure that every child is endowed with a memorable journey of hearing and being heard.