JAS community trained to strengthen the healthcare system of Jharkhand

The community's active participation in selected districts of Jharkhand gained pace with the formation of JAS committees and building their capacities on roles, and responsibilities in community monitoring of Health and Wellness Centres. JAS is seen as a mechanism for democratizing health and promoting active public participation in healthcare. 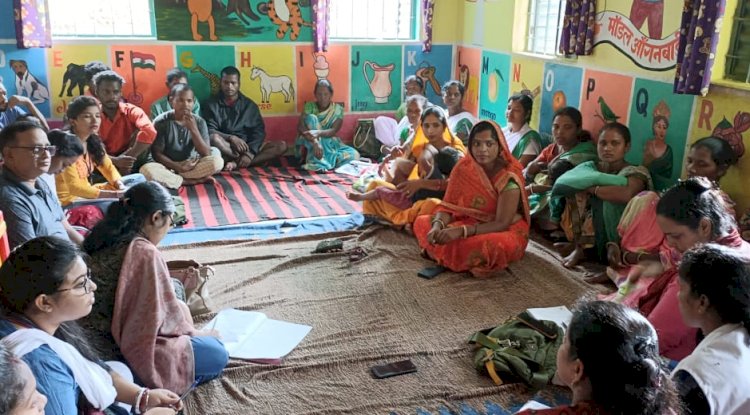 Jharkhand: GRAAM in partnership with District Health Administration, Jharkhand conducted several capacity-building training programs in Khunti and West Singhbhum districts for all the stakeholders of Jan Aarogya Samiti (JAS) including the health functionaries in the past three months.

GRAAM in association with Jhpiego is working towards strengthening the health system at the grassroots level. The community's active participation in selected districts of Jharkhand gained pace with the formation of JAS committees and building their capacities on roles, and responsibilities in community monitoring of Health and Wellness Centres. JAS is seen as a mechanism for democratizing health and promoting active public participation in healthcare.

Following the Government of India’s ‘Call to Action (CAT) Summit’ in February 2013, the Ministry of Health & Family Welfare launched Reproductive, Maternal, New-born Child plus Adolescent Health (RMNCH+A) to influence the key interventions for reducing maternal and child morbidity and mortality.

In this regard, the team of GRAAM trained JAS members in the Khunti and West Singhbhum districts of Jharkhand. Starting from August 24, the team visited the select HWCs to train and build the capacity of the JAS members.

The district-level training program was inaugurated by Dr.Ajith Xalxo, Civil surgeon, Khunti, Jharkhand, Dr.Basavaraju Executive Director, Mr.Ramakrishna, Sr.Program Officer, Jhpeigo, Dr. Ananya Samajdar, Dy. Director, of Research at GRAAM, Mr.Bhagavan Bidarakote, the Project Manager and the state program team of GRAAM along with the training participants were present during the program. On Thursday, Dr Jujhar Manjhi, Civil surgeon, West Singhbhum inaugurated the training program at West Singhbhum district. Dr.Manjihi also took a session on the various aspects of RMNCH+A and its importance in ensuring good health at the community level.

The participants were trained on RMNCH+A, Family Planning and TB services and their availability at HWC, key schemes and strategies for family planning, reproductive health care services, and key TB under the Ayushman Bharat Scheme were discussed.

A tete-a-tete with the villagers

The team of GRAAM also visited select HWCs and monitored the project's progress. The Community Health Officer, the head of the village and ASHA workers were met during the visit and several stories of change were observed with the active participation of JAS at the HWC levels.

Besides RMNCH+A, the GRAAM team also conducted the piloting of the Social Audit Mechanism carried out by Dr Ananya Samajdar along with the project team in Khunti. A total of 26 participants were present in this meeting including health workers (CHO, ANM, Sahiya), non-health workers, members of Jan Arogya Samiti, Panchayat representatives, and villagers.

During the training period, several aspects of HWC were discussed including the HWC infrastructure, health service delivery, and the health plan which was developed as part of the project discussed. The CHO presented the progress report of the HWC. The purpose of the social audit was achieved with the active participation of PRI members, like Mukhya, ward member, JAS members, community members and also the health service providers at the HWC and block level.

What does the Mukhiya have to say?

Speaking of the performance of the HWCs, the community health officer at Mahil said that there was a significant rise in the number of patients visiting the center for consultation. He also pointed out the center has also referred Cancer patients for further treatment.

In the review of the Village Health Plan, constructive decisions were taken to further strengthen the infrastructure of the HWCs.

Dr Ananya and Dr Arpita shared the ranking cards developed based on the IVRS call response given by the JAS members of the Mahil centre. They explained the process of ranking card generation i.e., through the IVRS call-based response received from the non-health functionary JAS members of the Mahil center. They also shared the details of the  PSS (Patient Satisfaction Survey) done by the JAS members themselves and shared the satisfaction survey outcomes with the participants

GRAAM in collaboration with Jhpiego will be working on strengthening JAS through various capacity-building and awareness programs in the coming months.

A facilitative session to help students plan their future