The Founder and Chairman of GRAAM Dr R Balasubramaniam, presented the “Highlights of the GRAAM & NABARD Report on the state of Social Stock Exchanges (SSEs) around the world”. 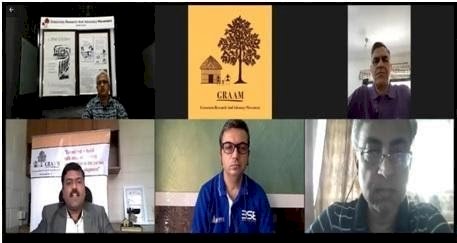 A webinar titled “Can Social Stock Exchange (SSE) play a role in India's Development? - A Global Perspective” was held on 25th July 2020. About 900 participants including government officials, international agencies, academic institutions, civil society organizations, media houses and professionals across the country attended the webinar on a virtual platform and it was also live streamed on social media platforms.

Dr Basavaraju R, Executive Director, GRAAM explained the background for SSE in India and the need for a facilitative environment for social organizations, by building the ecosystem for Social Enterprise than jumping directly into the SSE. He quoted the articles of HBR explaining the need for support to build the capability of the social sector.

The Founder and Chairman of GRAAM Dr R Balasubramaniam, presented the “Highlights of the GRAAM & NABARD Report on the state of Social Stock Exchanges (SSEs) around the world”.  He shared key points of the study which extensively analyzed the Social Enterprise system in India, its gaps and challenges, role of the Government in supporting social enterprises and suggested a few forms for the Government to support social enterprises. Dr Balasubramaniam emphasized that the social enterprise ecosystem should be carefully developed. Since, it would be the demand-side foundation of the proposed Social Stock Exchange (SSE). He elaborated the demand-side and supply-side components of the proposed SSE as well as the intermediaries, regulators and infrastructure for the same. He shared examples of SSEs from around the world and stated the need to customize the chosen model to India’s development sector realities and cultural values.

Mr Girish Joshi, Chief Trading Operations and Listing Sales (BSE), spoke about the Sustainable Stock Exchange and SSE of India- How complementing and contradicting are the concepts. In his view, “the Sustainable Stock Exchange and the SSE are complementary in nature. While the SSE would enable Social Enterprises to get impact investment funding from listed corporates, it would also enable the Social Enterprises to help listed corporates to achieve better conformity with sustainable business goals and sustainable development goals.”

Mr Hemant Gupta, MD CEO of BSE Sammaan CSR Ltd.  Spoke on “The SSE Concept of SEBI - How facilitative it is for the Development Sector?” He stressed the need for discipline in social development investment and inclusivity on the demand and supply sides of the SSE and argued that the SSE would encourage social projects of large scale and collaboration between civil society organizations.

Dr Harsh Kumar Bhanwala, Ex- Chairman NABARD, spoke about “How NABARD's Existing Social Enterprise Promotion Ecosystem can play a role in the context of SSE?”. He pointed out that defining ‘impact’ is important for improving the finance flow to Social Enterprises. He viewed the capacity building of non-profits as the key prerequisite for them to benefit from the SSE. He assured that NABARD has diverse skill sets to work with various entities including FPOs and NGOs for the development of the SSE.

In his concluding remarks, Dr Balasubramaniam appreciated the efforts of the NGOs in mitigating the crisis faced by migrant workers during the Covid-19 pandemic, and argued that the value created by them goes far beyond their measured impact. He expressed hope that the SSE would support and enhance the good work being done by NGOs and would be a milestone in India’s development.

About GRAAM SSE Study: With the support from NABARD, GRAAM has undertaken a study to analyze India’s Social Enterprise ecosystem, its gaps, challenges, define the role of Government and examined a number of models as well as gather best practices of SEs & SSEs from around the world, suggested the roadmaps for strengthening India’s Social Enterprise ecosystem and development of a Social Stock Exchange that can emerge as a game changer in the financing of India’s development sector. A detailed study report be found at www.graam.org.in/ssewebinar

Workshop on “Health visioning exercise and Development of Health Plan”...

‘Children’s engagement with learning is disrupted during the pandemic-related...