The curious case of child marriage and COVID 19 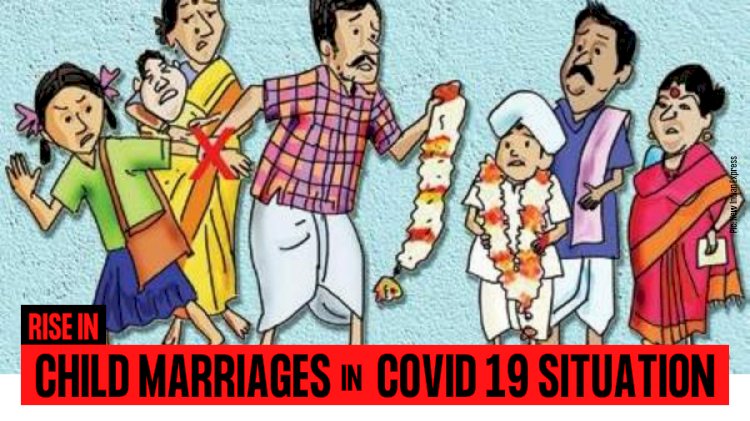 The year 2020-21 has been a year of unexpected challenges. Amidst COVID 19 and its adversities, school education has completely come to a standstill. With the present situation, school closures have impacted hundreds of millions of students. Not only affecting the schooling and learning of children but also the life of the children.  Children being out of school are engaged in different activities that hinders their normal development. Risks of child labour, child marriages have increased.

Under Sugamya shiksha we started a community learning centre during the Covid closure of schools. We started the learning centre in 5 selected areas of Mysuru, reaching 250 children and engaging them in learning. We went around the villages and casually talked with the people to get information on the status of children in their community.  Interacting with children and community shed light on some cases of child marriages.  We thought of sharing a few.

Child Marriage has been practiced for centuries in India and is one of the burning problems. In India, despite amended laws advocating 18 as the legal minimum age at marriage for females, a substantial proportion i.e. every third adolescent girl in the age group of 15-19 years is given away in marriage and every second married adolescent girl has given birth to a child. According to the Registrar General of India (RGI) Report (2001) Rajasthan has the highest (40.8) percentage of females ever married among 15-19-year-old girls as compared to India (24.9 %) followed by Bihar (39.6 %), Madhya Pradesh (34.1%), Jharkhand (32.9%) and Andhra Pradesh (32.3%). The problem of child marriage in India remains rooted in a complex matrix of religious traditions, social practices, economic factors and deeply rooted prejudices.

While the prevalence of girls getting married before 18 years of age has declined from 47 per cent to 27 per cent between 2005-2006 and 2015-2016, it still stands too high. The decline may be the result of multiple factors such as increased literacy of mothers, better access to education for girls, strong legislation and migration from rural areas to urban centres.

There has been a report of an increase in child marriages during the lockdown period due to COVID-19.  The Karnataka State Children's Rights Commission has reported the highest number of child marriages in April, May, June and July. There were 156 cases of child marriage in the past 12 months, compared to 112 in these four months this year. It has emerged that most of the child marriages took place in Karnataka during lockdown. Observed majorly in the rural areas of Bellary, Mysuru, Bagalkote, Belagavi and Dharwad districts.

The 181 helpline has been launched to reduce child marriage and raise public awareness.

It is ironic that child marriage is still alive in Mysuru district, in a city with rich cultural background. The closure of schools due to the outbreak has led to an increase in child marriage cases in Mysuru.

Here are the few cases we came across:

Since both parents have to work to make ends meet, safety of the child at home is a concern. Marriage for security reasons looks temptingly like a viable option.  Now that the schools are open, we can find more girls coming to schools than boys.  And we can find relief in the expression of girl students.

There are a lot many more cases like these if we go on digging. The schools not only support the education but are also a security option for the girl children for many reasons.  The schools allow different children with different attitudes to come together. Each of them influence each other and support one another psychologically. The friends and teachers are the greater strengths and motivators.  It has been known that teachers become the councillors and mentors when a child marriage is thought of in a village.  In rural and backward areas teachers are the greatest supporters for the girl child to continue her education. The COVID-19 and the closure of the schools have affected this support mechanism and we have lost many girl students to the ‘marriage system’ from the ‘school system’.

GRAAM has been awarded with Research study to Assess the Health and Wellness...

Launch of IVRS for Strengthening Community Engagement through JAS