We Mill: A farm-to-plate story of Ragi

In a span of three months, We Mill has reached out to corporate campuses to promote the adoption of healthy superfood alternatives like ragi malt. Demonstration of We Mill’s hassle-free ragi mudde garnered positive reception. The campus visits also turned out to be an opportunity for the We Mill women to voice their story of running a successful social business. 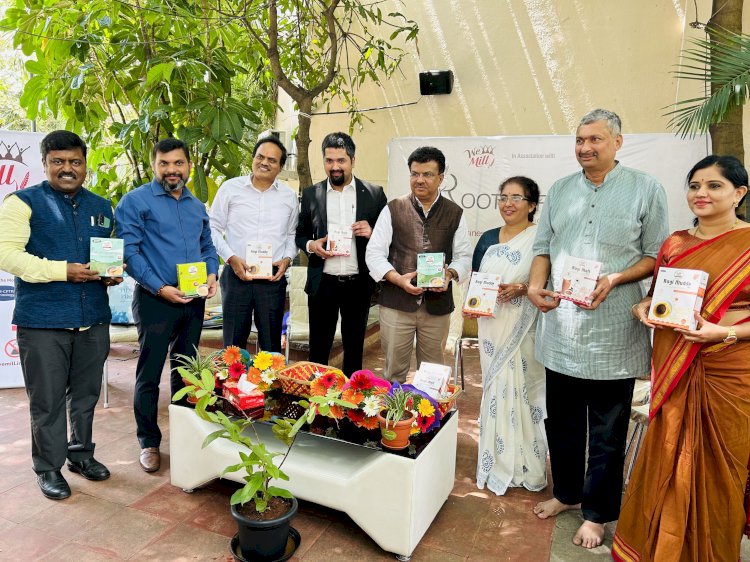 Bengaluru: Within eleven months of its launch, We Mill is on its way to becoming a household name for a range of healthy ragi products. With continued efforts by the We Mill women, the superfood has found its place on the plates of several health-conscious customers. Be it the We Mill Ragi Malt n' Shake, ready-to-cook Ragi Mudde Mix, or the delectable We Mill Ragi cookies, the products have secured a spot in the Indian kitchen. In these 11 months, We Mill was present at several events across Bengaluru and Mysuru.

In the past three months, We Mill reached out to several corporates campus to promulgate the benefits of superfoods. In the corporate setup, employees often lead a sedimentary life with an unlimited supply of caffeine-filled beverages, without realizing the hazards of it. By reaching out to these corporate campuses, We Mill promoted the adoption of healthy superfood alternatives like ragi malt. Demonstration of We Mill’s hassle-free ragi mudde garnered positive reception. The campus visits also turned out to be an opportunity for the We Mill women to voice their story of running a successful social business.

We Mil received the opportunity twice to make its presence felt at the vast Infosys campus in Mysuru. They were also a part of the Startup Pavillion event which promoted budding entrepreneurs in Mysuru. Going beyond their home turf, We Mill was invited to set up a stall at Chitrakala Parishat in Bengaluru by the National Rural Livelihood Mission. We Mill’s hot Ragi Malt’n Shake and cookies enthralled the audience of Chowdaiah Memorial Hall as well. All in all, 2022 turned out to be a successful business venture for We Mill women.

"Roots of Graam- A social business initiative by the rural Women of India", was organized in collaboration with Wuerth Elektronik and the Shilpa Foundation, to nudge rural women's social entrepreneurship and the We Mill initiative.

In explaining the process of establishing We Mill, Dr Basavaraju R Shreshta said that GRAAM was in fact experimenting at the grassroots level to create a sustainable livelihood model for women. According to Dr Shreshta, We Mill was an amalgamation of the contributions of the government, corporate, NGO and community and each of them had a unique role to play.

The executive director then elaborated on the training provided to women and he went on to explain how GRAAM had conducted a feasibility study in 20 villages of Mysuru only to shortlist four villages to establish the rural business model. Dr Shreshta further spoke of the social experiment process conducted in all those four villages which helped them zero down Bilikere. “40 women from Bilikere village were chosen and at the end of the training, 14 of them were finalized, there is immense strength and unity between them”, Dr Shreshta added.

The guests gathered for the discussion savored We Mill’s ragi malt and encouraged the women to take the rural-social business to greater heights. At the Fedilitus Gallery premises, We Mill women displayed their products and narrated the story of their success to the corporate employees.

We Mill is now available in 50+ stores in both Bengaluru and Mysuru. We Mill products are also available on leading e-commerce platforms like Flipkart and Amazon.

A look into the Forest Rights Act 2006, beyond rejections

GRAAM’s Factsheets gets a launchpad at 3PE

The Feeling of Anticipation

Youth For Governance- Reports to be translated into action