As per the Reserve Bank of India, we might have to stay in inflation for at least next six months,” Prof Bhanumurthy revealed. Bhanumruthy also asserted that RBI is conducting many surveys to understand the situation at ground level. 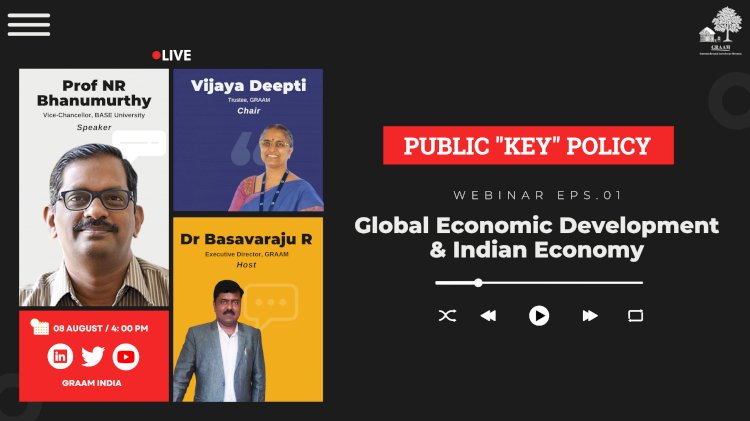 Aug 08, Bengaluru: GRAAM, a development research organization has initiated a brand new series of webinars named ‘Public “Key” Policy’, taking the policy talk to the public. In the very first episode of the webinar, our special speaker, Prof NR Bhanumurthy, Vice Chancellor of BASE University spoke on the ‘Global Economic Development and Indian Economy’. The webinar was chaired by Deepti Vijaya, Trustee GRAAM and hosted by Dr Basavaraju R, Executive Director of GRAAM.

Inflation in India: Problems and prospects

On being asked if India is being affected by the global economic slowdown, Prof Bhanumurthy said that India is facing a post-covid crisis, however, it is well placed to mitigate the recession crisis. Inflation affects each and every household, “GDP might not be equally distributed but inflation does,” he pointed out.

Pointing to the current status of inflation in India, the Vice Chancellor said that the inflation is at 7% and efforts should be made to bring it down to 4%. “As per the Reserve Bank of India, we might have to stay in inflation for at least next six months,” Prof Bhanumurthy revealed. Bhanumruthy also asserted that RBI is conducting many surveys to understand the situation at ground level. Pointing at one such survey, he stated that the ‘Household Expenditure Survey’by RBI shows a significant dip in inflation in the next six months, as a result, the market might also go up by 6%, the VC suggested.

Speaking about what is keeping India’s boat afloat in the situation, “it is the coordination between Fiscal and Monitoring policies that have kept the country safe,” he said. Despite two years of unprecedented situations like Covid-19, India has managed its economy well, the VC said. While European countries are reaching two-digit mark inflation, India is at bay, Prof Bhanumurthy added.

The economist also drew attention to the condition of the USA inflation and mentioned that in the 1980’s the USA faced 14% inflation due to 12% interest points. Drawing a comparison between 2008’s recession in India to the present, Bhanumurthy said that India was at 14% inflation back then and now it is at 7%. He further added that it was a structural economic slowdown across the globe.

Q&A with the audience

Prof NR Bhanumurthy also answered the questions raised by the audience. Speaking of loan repayment in India after the Indian rupee dip against the dollar price, he suggested that people who would have taken loans might have thought about the edging, if they haven't, then definitely it would be an issue. He suggested the audience read newspapers every day and said there was a silver lining as more and more companies were now willing to invest in India.

Answering the question on increasing Repo rates posed by Dr Basavaraju R, the VC said that the large part of the hike in the Repo rate was due to the open economy macro issues and not entirely because of inflation. He further added that the substantial increase in domestic oil prices after the Uttar Pradesh assembly elections led to the weakening of RBI’s monitoring policies.

What is happening at Srilanka?

Deepti Vijaya, the trustee of GRAAM, raised her concerns about the Srilankan economical crisis, and in response, Prof Bhanumurthy warned Indian states to be careful of their Public Debt. He said India has to be careful of its micro fiscal policy and the Public Debt had to be known to the citizens, the situation of a few states is concerning, however, India needs to wake up before it turns out to become another Srilanka,  He opined that Srilanka was comfortable in March 2022, but they ended up in an economic crisis soon after.

The webinar on ‘Global Economic Development and Indian Economy ’ turned out to be insightful. More than 30 participants from across the countries took part in the webinar. GRAAM will strive to bring more such insightful discussions onto the table.

Click the link below to watch the webinar
https://youtu.be/KC5EggfBjxs

Dr Balu will Head the Committee on Karnataka Youth Policy-2021