SVEEP Museum: An feather likely to be added to the Cap of Mysuru

A Systematic Voters Education & Electoral Participation (SVEEP) Museum and a Capacity Building Centre is a flagship programme of Election Commission in India with aim of facilitating an inclusive, informed and ethical participation. The Election Commission of India has come with the proposal of a museum of democracy in Mysuru. In order to discuss the nature, structure, place and maintenance aspects of the museum, GRAAM and Mysuru District Administration jointly organised a Focus Group Discussion (FGD) in the month of July. 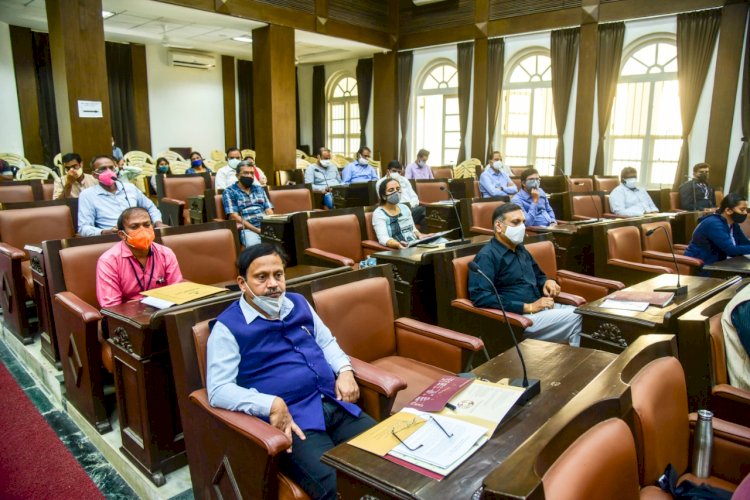 SVEEP Museum: An feather likely to be added  to the Cap of Mysuru

When the word 'museum’ strikes in our mind, onset  we begin to visualise artistic objects, ancient history and past glory in our mind’s eye. It multiplies our curiosity towards culture, tradition and civilization of yester years.  Heritage city and prominent tourist destination Mysuru already has a couple of museums in the heart of the city. Palace Museum, Railway Museum, literary fame R K Narayan Museum, Sand Sculpture and Wax Museum are the most visited tourist attractions in Mysuru. The Election Commission of India has come with the proposal of a museum of democracy in Mysuru.

A Systematic Voters Education & Electoral Participation (SVEEP) Museum and a Capacity Building Centre is a flagship programme of Election Commission in India with aim of facilitating an inclusive, informed and ethical participation. Unlike the museum of artifacts or relics of cultural, historical or scientific importance, it is a museum for electoral education and enhance public participation in democracy.

In order to discuss the nature, structure, place and maintenance aspects of the museum, GRAAM and Mysuru District Administration jointly organised a Focus Group Discussion (FGD) in the month of July.

Responses on the nature of the museum

Stakeholders from various sections shared their viewpoints on the nature of the proposed museum and capacity building centre. How to get every Indian citizen in the poll booth to voluntarily vote for a healthy democracy was debated in the meeting.

Participants demanded that the efforts on educating the educated should be taken care of through SVEEP museum.  They argued that villagers are conscious about their voting rights and even an aged person will cast his vote. In reality, awareness needs to be created among city dwellers where voter participation rate is relatively less.

When compared to other museums, the museum of democracy doesn’t accelerate any inquisitiveness among the visitors.  Creating interest towards unexciting subjects was another significant point of the discussion. Ideas like arranging entertainment programmes in the museum to captivate audience’s attention, providing a platform for artists to theatrically spread awareness about various aspects of democracy, street plays and conducting film festivals related to democracy were discussed in the event. This discussion ended with the conclusion that the museum should attract people of all ages and all sections so as to draw tourists to visit this place.

As students have a stake in democracy, attracting and educating students towards the museum was debated. Participants demanded that the foundation of democracy should be taught to them and it can be done more effectively by conducting school elections and hosting school parliament sessions in the museum. The proposal for documentary screening in the auditorium related to the evolution of democracy from the inception was put forward in the discussion. Visiting this museum as a part of school tours, was also raised.

In India we don’t have punishment for not voting.  Stakeholders stressed on the need of ethical voting and creating a civic sense that casting a vote is a duty of every citizen. Participants also advised for utilising the space of the museum to uphold the under-represented decision taking power of a woman through conducting workshops for them. Conducting   capacity building workshops for the people's representatives to enhance their accountability was also considered. Futuristic ideas such as introducing digital voting were put forward in the meeting.

Debates on location of the museum

Few stakeholders expressed their concern over the allocation of land for the museum and proposals to reuse available heritage buildings in the city and retro-fitting was advised. Building design contests for architecture colleges and display of Election process inside the building were also suggested in the FGD.

Places like University of Mysuru, site between Mysuru palace and Chamundi Hills, Old DC office, inside the zoo and Karanji lake, exhibition ground, public library and concept of a museum on wheels were proposed.

Suggestions for maintenance and Revenue generation

Charging nominal fee for entrance and providing a boarding facility (dormitory), caffe, separate wing for the sale of Geographical Identification Tag products, indigenous art and craft centre, Virtual realities for children, 3D animations, games related to education and charging a nominal fee for maintenance was discussed.    it in PPP model, assigning administration to district administration and NGOs were also proposed in the meeting.

Incorporating all the details GRAAM submitted a Detailed Project Report (DPR) to the Election Commission of India.

Demonstration of Community Monitoring and Social Audit Mechanism at Grassroots...