The two-week intensive program workshop on Public Policy and Program held at the Indian Institute of Public Administration aimed to impart practical guidance and enable professionals to build a culture of evidence-based policymaking. 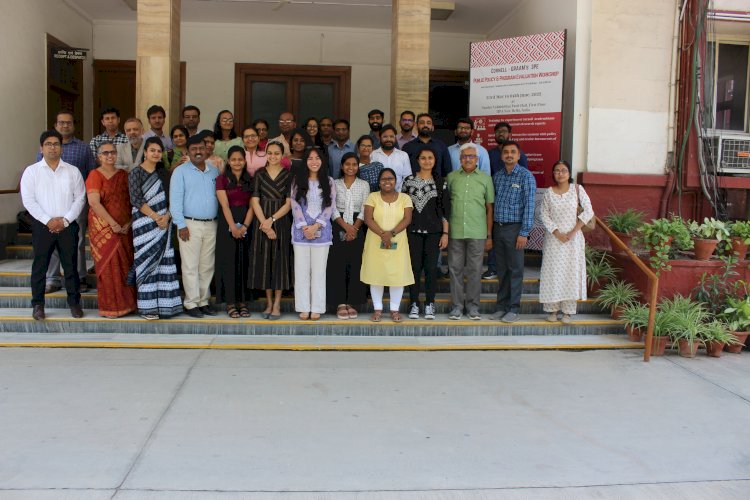 New Delhi: The fourth edition of the Public Policy and Program Evaluation workshop hosted by the Grassroots Research and Advocacy Movement (GRAAM) in collaboration with Cornell University concluded on Saturday. The workshop was successful in igniting the minds of the participants into becoming better policymakers.

The two-week intensive program workshop on Public Policy and Program held at the Indian Institute of Public Administration aimed to impart practical guidance and enable professionals to build a culture of evidence-based policymaking. The sessions were carried out by GRAAM and Cornell University professionals.

The 3PE workshop was inaugurated by Ms D Thara, Additional Secretary, Ministry of Housing and Urban Affairs on May 23, and in her inaugural address, Ms Thara highlighted the AMRUT 2.0 scheme. Her take on water security and the AMRUT project accelerated the 3PE workshop.

The 3PE platform also enabled participants to gain practical and grassroots knowledge from government officials and industry experts. With an intent to provide practical exposure to policy-making, a series of special lectures were held during the two weeks. As many as five special lectures were held so that the participants of diverse backgrounds could derive better insights into policymaking from the experts themselves. From understanding the meaning of policy to its evaluation and analysis, the sessions were truly illuminating the minds of the participants.

The special lectures included an insightful lecture on ‘Understanding India’s Budget-Making Process’ Dr TV Somanathan, Finance Secretary and Secretary (Expenditure), Government of India on May 24. During the discourse, the Finance Secretary threw light on the process of preparation of the budget by presenting interesting facts and figures.

Speaking on the working of Nishtha, an inspiring project of Jhpiego, Dr Ravi Kumar AV- Deputy Chief of Party, Nishtha-Jhpiego on May 27, shared his expertise on ‘Monitoring & Evaluation- Large Scale Development Projects’ in the healthcare sector. Informative and insightful factsheets on the 'Evaluation Study of Out Of Pocket Expenditure Incurred for Maternal Health Care by BPL Women in Karnataka in Public Health facilities.’ was launched in the presence of Dr Ravi and Dr Arun Karpur and Director- Autism Speaks.

On May 28, Dr Sekhar Bonu, Director General, DEMO Niti Aayog who spoke on Monitoring Large Scale Government Projects introduced the participants to understanding government projects like MGNREGA better. Dr Bono delineated how the projects are planned and carried out as he also shared information on the Output Outcome Monitoring Framework and the same of Development of Rural Development Case Study of MGNREGA. The factsheets on the evaluation study of Deen Dayal Upadhyaya Grameen Kaushalya Yojana (DDU-GKY) in Karnataka were launched in the presence of Dr Bonu, Prof Sachin Chaturvedi, Director-General, RIS Delhi and Dr R Balasubramaniam, Founder-GRAAM and Dr. Basavaraju R Shreshta,  Executive Director of GRAAM who moderated the session.

During the lecture on ‘Making Public Policies Result Oriented’ by Mr Praveen Singh Pardeshi- Member (Admin) Capacity Building Commission, participants understood the perspectives of the policymaker. Mr Pardeshi on May 31, was successful in imbibing the roles and responsibilities of policymakers among the participants. Factsheets on the ‘Free Supply of Bicycles Scheme to 8th Std students studying in the government and aided schools and students in hostels of the Social Welfare Department in Karnataka’ was launched on the occasion. Dr Balasubramaniam, the Founder of GRAAM, joined Mr Pardeshi in the launch.

On June 2, it was Mr Hemang Jani, Secretary, Capacity Building Commission who ended the special lecture series with his insightful take on ‘Accrediting Central Training Institute- Evaluation of Institutions’. With his immaculate presentation, Mr Jani explained the concepts of Central Training Institutes, the process of accreditation, ranking, and rating systems. Post the session, a factsheet on the ‘Evaluation study of NOAPS and SSY Schemes for the Senior Citizens’ was launched by Prof Yugank Goyal from Flame University and Mr Jani.

The 13-day 3PE workshop came to an end on Saturday with a valedictory session. Dr  R Balasubramaniam presided over the closing ceremony. Summarizing the learnings of the 13-day workshop, Dr Balasubramaniam gave an example of how they monitored and evaluated the concerns of passengers of the Indian Railways and charted out a plan followed by an evidence-based solution which helped them draft a solution to tackle the same. This gave participants a grassroots understanding of how evidence-based evaluation can help strengthen policies.

Dr Basavaraju R Shreshta opined that the aim of every public policy is to derive the maximum benefit. “But, sometimes it so happens that policy becomes counterproductive due to assumptions and predictions of Policy Planners' ', he said adding that the policy analysis and evaluation are essential and GRAAM, a development research and policy engagement organization is committed to building a competent evaluation community.

Prof Sarosh K, from ILR School of Cornel University, Dr Ananya Samajdar, Deputy Director of GRAAM were a part of the valedictory.

As many as 30 participants from prestigious institutions like the Quality Council of India, Tata Steels, and AIGGPA were a part of the workshop. For the special lectures which were streamed live on YouTube, more than 100 participants lent their ears to maximize knowledge.

Dr Balu will Head the Committee on Karnataka Youth Policy-2021